Warning: Use of undefined constant shortcode_found - assumed 'shortcode_found' (this will throw an Error in a future version of PHP) in /homepages/38/d245016255/htdocs/www/blogMD/wp-content/plugins/flickspire/flickspire.php on line 145
 In Honor of John Wayne “Jack” Schlatter | | Page 0 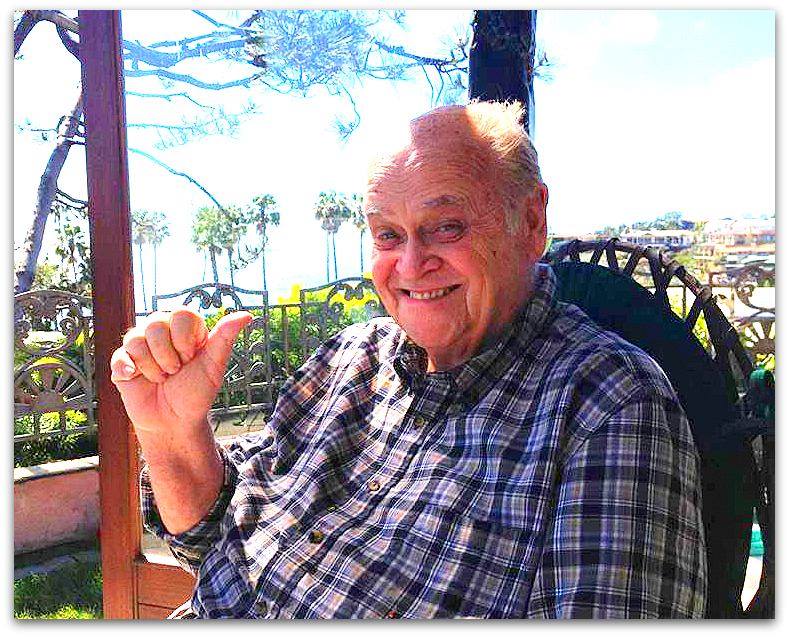 ‘God Love Ya!’ was Jack’s every day greeting to the world!

God bless John Wayne “Jack” Schlatter today as he has made his transition peacefully this morning after having suffered a stroke a week ago.

I’ve always felt that the early moments after a person’s passing is the time when you are still be able to feel their presence as they are traveling around giving last invisible – yet felt – hugs before traveling on …. and I feel him hugging me and nudging me to let you know about what he’s been up to these past several years behind the day-to-day scenes of substitute teaching!

As I sit here at my computer, with good but sad feelings of “missing you” tears, I feel Jack right here urging me to not wait for any time to pass before sharing with you the work that we did together to keep his legacy going forward long after he was gone.  Working on his books with him was a truly such a labor of love and is a tribute to his life’s work… teaching from the heart.

I found Jack online several years ago to do a movie about a story that he’d written, A Simple Gesture, and from that first contact our friendship and love connection began.

I think you will agree with me that he was such a love bug ...

It was so fulfilling and fun working with him – as his publisher and friend – to create his book, Gifts By The Side Of The Road. During the completion of that book we would literally spend hours on the phone laughing.  As you well know, Jack could tell story after story – with a few corny if not unsavory jokes in between – without missing a beat!

Just for example:  Jack called saying he was concerned that currently, there’s more being spent on breast implants and Viagra than on Alzheimer’s research… He felt that by 2040, our senior citizens will all have perky boobs and huge erections and no idea what to do with them!!!

On this very special day of Jack’s graduation into the next great adventure, I thought you would enjoy watching Jack speak about the importance of leaving your Gifts By the Side of the Road… as a celebration of his amazing life.  My husband Craig and I truly LOVE this video of him! Just click here or on the graphic below:

I let Jack know last night that I would finish the second book that we were collaborating on so we could keep going forward with his legacy. It is a book inspired from another one of Jack’s writings that we also turned into a poster and movie called,  I Am A Teacher.  This next book will include more wonderful stories about Jack’s students and what he did that made a big and lasting difference in so many student’s lives. (See my PS below to learn how you can contribute!)

Here is a very special moment with Mark Victor Hansen celebrating I Am A Teacher being selected for the first edition in the Chicken Soup for the Soul Series which Jack cherished:

I was not one of his students but Jack would have been the type of teacher that would have made such a big difference in my life had he been.

In my imagination, I often think about Jack cheering me on as a teenager.  As an adult, I received the benefits of his unconditional love and approval.  He loved everything we did together and he never missed an opportunity to lavish me with his acknowledgment and appreciation of any little thing I had to offer.

I just LOVE just how dapper he looks in his red shirt and tie… don’t you!? 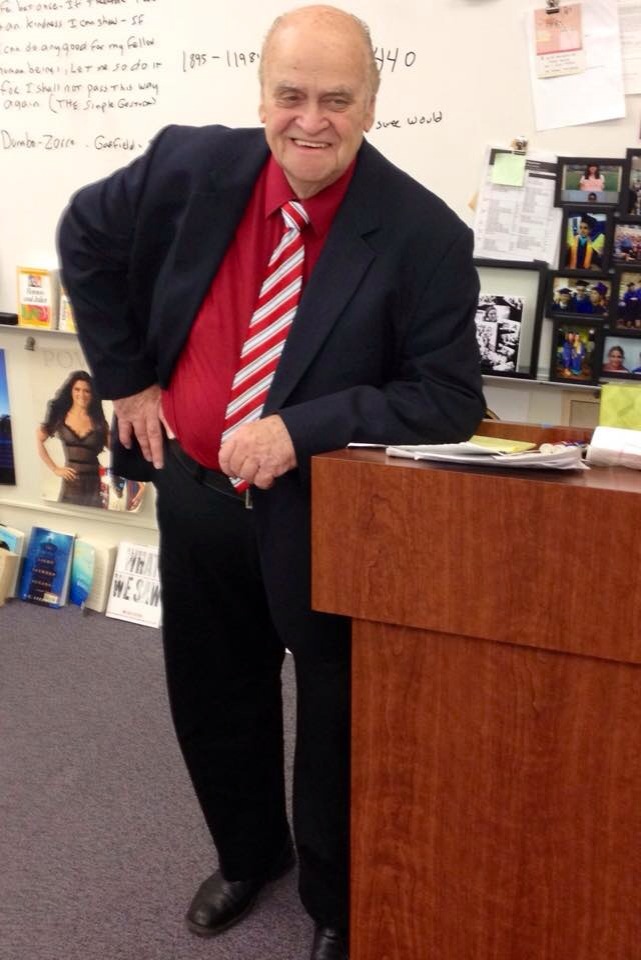 I was fortunate to be with Jack at his last speaking engagement this past September at Newfield School District in NY.

This past week I wanted so much to be with Jack, but I must say that I received such comfort from the fact that in his final days, his love for his students was so wonderfully and lovingly reciprocated as they came in droves to his care facility.

In all of my 35+ years in Education I have never, ever seen such a constant outpouring of love, regard and connections between teacher and students – dating 57 years back – than what I’ve witnessed in Jack’s life.  It is such a tribute to a man’s LOVE of teaching.

This is a very typical daily scene for Jack always surrounded by the students he adored and who gave him so much JOY. (Jack is in his wheel chair smack dab in the middle of all the conversation). 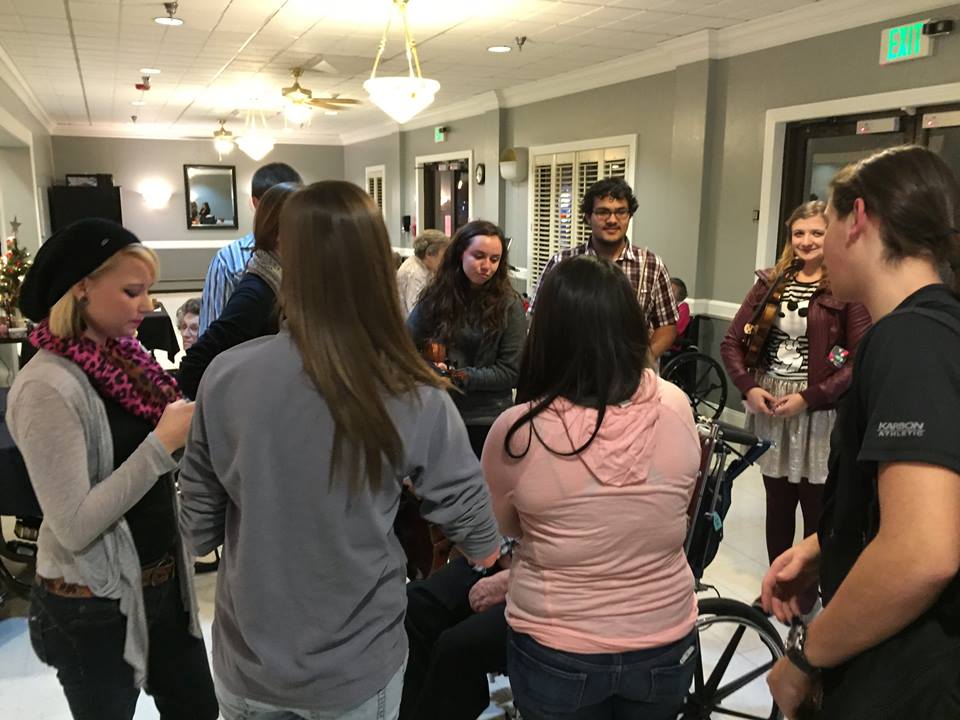 Jack had company almost non-stop, I could barely get my calls through to talk to him; but I felt so much better knowing just how much he was being surrounded in love.  I wish I could have been there to hear this … 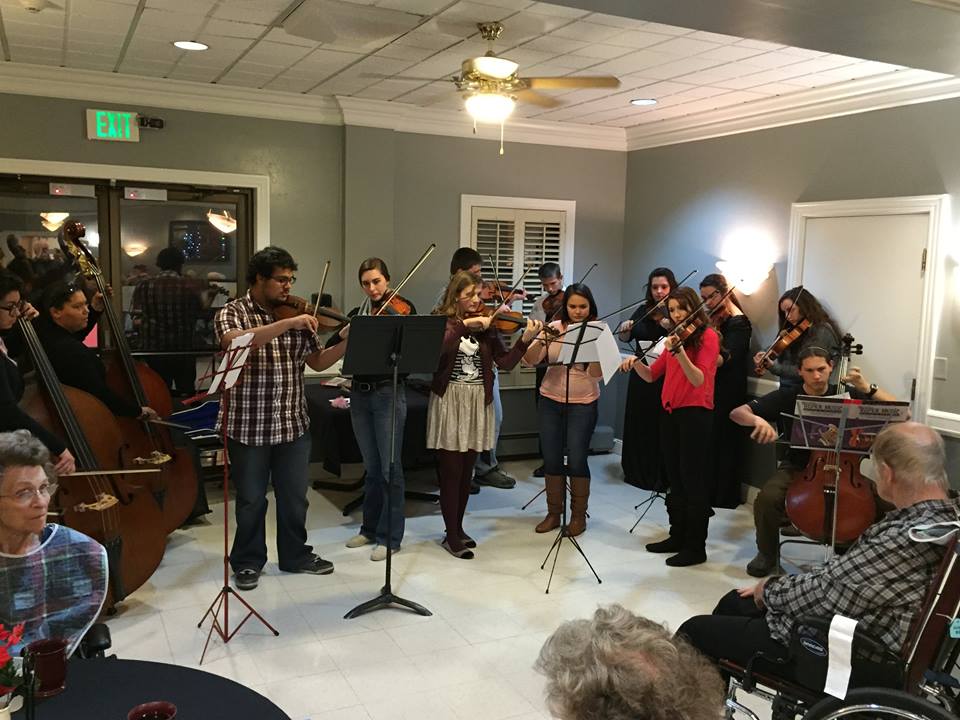 I was also comforted that his beloved friend Marty Crowe and his brother Bryan were with him this morning as he made his transition peacefully.

Our thoughts are with Jack’s beloved friends and entire family, including this very special moment with his brother George at an Acknowledgment Ceremony given in Jack’s honor in Anaheim, CA several years ago by a large contingency of his former students … 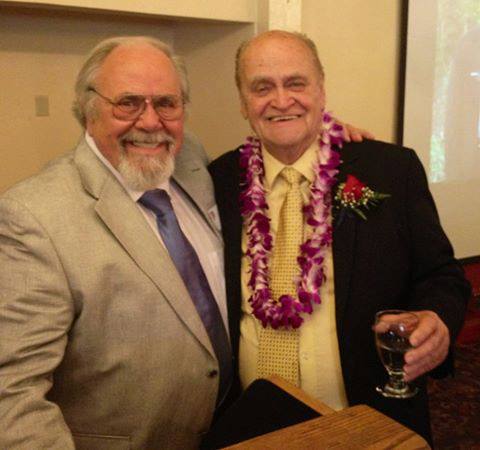 I believe the Schlatter family is having some good belly laughs and tears together today. One of George’s favorite stories about Jack growing up is about his experience with making a doorstop and is in Gifts By The Side of the Road.  I can hear Jack and the entire Schlatter bunch laughing about it now… so with this story, I will say good bye dear friend.

My brothers and my Dad were skilled craftsmen. We always had a wood shop in our basements when we lived in Missouri. They made birdhouses, cabinets, tools, toys etc. As for me, I couldn’t even make a paper airplane that could fly.

In 1949,  I found myself in an 8th grade wood shop. Wishing to duplicate the accomplishments of my brothers and Dad I decided to build a bookcase and ordered the necessary wood.

Now, so you can fully appreciate the full impact of this tale, I find it necessary to describe the financial situation of America at this time. Gasoline was about 16 cents a gallon, stamps were two cents, movies were 25 cents, popcorn a dime, candy bars a nickel. In 1952, I earned 65 cents and hour as a movie usher and my girl friend, Shirley Reed started out a Newberry’s  Department Store for 35 cents an hour and we both were able to save a lot of money while enjoying full social lives. There was less money but it bought more.

So, back to the wood shop… as I started to build my bookcase, wood was broken or miscalculated so the bookcase became a planned footstool, which was reduced to book ends… and so on… Finally the shop teacher called my Mom and told her that he really liked me and wanted to pass me but I had to build SOMETHING.  Mom suggested a doorstop.

Thus began the great project. After I told the family that I had drawn the ‘plans?’ for the doorstop, they requested a day by day account of my progress. Giggling took place when I announced that I had cut it out and big laughs followed when I triumphantly announced that I had put on the first coat of paint.

Finally the big day arrived. The entire family had been sitting in the kitchen talking when I got home and pulled out the long awaited doorstop. It was five inches long and four and half inches high and had big hole in the middle for pulling it out from under doors (which were never stopped by my invention). My Mom laughed so hard tears streamed down her face, Brothers Bob and George had to get up and walk around to avoid stomach cramps while my thrifty Father yelled, “This is what cost me 18 DOLLARS!”

That little object became a family legend. More often than not, the story was told and the doorstop was presented to great laughter to invited guests.

As we moved a lot in those days, the birdhouses, tables and toys got left behind… the only object that was always packed away was the treasured doorstop.

Mom kept it and shared the story with everyone until she left us in 1980. While it supplied us with many entertaining moments, it also taught me a great lesson.

It is natural for parents to take great pride in the victories of their off springs but it is the rare family, who can turn a defeat into a victory of mirth. Even our Scottish/German Father said it was worth the $18.

One of my favorite students, Laurie Klatscher said that the greatest givers are the best receivers. In their ability to receive the result of my bumbling with such joy, my family gave me the great gift of knowing that wither I climbed the mountains of accomplishment or fell into the pit of failure I was loved, appreciated and valued…

No Christmas present ever topped that…

PS …Jack’s A Simple Gesture story and movie has also been included in our Make A Difference with the Power of Acknowledgment WEEK UTrain Program. This program is central for our Make A Difference Movement to get 1 Million “I Make A Difference” Wristbands into Persistently Low Performing Schools in an effort to heal the social emotional issues we as a society must come up over and resolve.  In honor of Jack, we here at Heart Productions & Publishing are donating 10% of all of the proceeds from Jack’s movies, books and posters to this project beginning today.

PPS … If you were a student of Jack’s and would love to contribute to his next book, I Am A Teacher, please send me an answer to this:

“What did Mr. Schlatter do, specifically, that made him a such great teacher.”

Keep it to 1000 words or less and email it to me at Mary @ MakeADifference.com.  We will let you know if your story has been selected for Jack’s next book, I Am A Teacher.

This entry was posted in Gifts by the Side of the Road, Make A Difference Message. Bookmark the permalink.